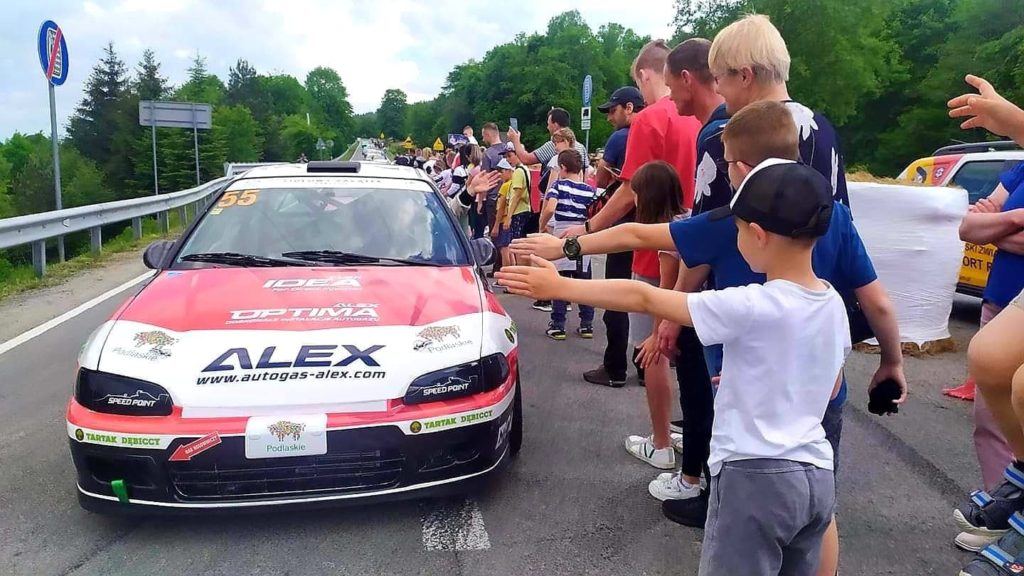 The rally driver of ALEX Racing Team has had 3 starts in the Polish Hill-Climb Championship. In each of them he stood on the podium, but as he says himself, it was hard and he still has to learn a lot. About motorsport, combining work with demanding passion, about giving 100% of yourself – says Tomasz Lewczuk – ALEX Racing Team rally driver.

From amateur to professional in 2 years

The transition from amateur sports to professional mountain car racing is a real leap into the deep end. Just such a move was made by Tomasz Lewczuk from Podlasie, who is making his debut in professional sport this season, standing shoulder to shoulder with top-level motorsport competitors.

– For a guy who drove two years in an amateur, the transition to professional sport is a really big leap and only now I learn all about this racing. It’s a completely different world where there is no room for error. My starts mean breaking. When your head tells you that you need to brake, and to keep the pace of the fastest competitors in the class, I have to break and move my limits all the time. – admits the only representative of the Podlaskie Voivodeship in the series of mountain races.

However, both the start in the Bieszczady Race in Załuż near Sanok (1st stage) and in Magura Małastowska (2nd stage), Tomek took second place in the 10C class (cars with an engine capacity of up to 1600 cm). He had sections from 4 to 6 km to cover, and during the race on Załuż three times breaking the route record in the 1600m class, of which twice his own. The race in Sienna (3rd stage) Tomek finished first in class orz III in the general classification of group A.

– “The cult route” Sienna “… I liked it a lot. This one in my atmosphere … a bit of courage in racing, but with rally accents. Apparently very difficult. We have another start in Limanowa and the Ostra Pass – on an extremely technical and spectacular route. Of course, we will fight and I hope with some nice result at the end of the season – announces Tomasz Lewczuk.

The rookie is making a fuss

Its 1.6-liter Honda is treading on the heels of a car like the Porsche 911. Its excellent, but still debut, results make quite a stir among rally drivers. How is it possible for the first time to come to technical, difficult mountain routes and have such good results?

– There is no room for error at this level. I don’t know if the head plays a bigger role in the start. On the road, you have to work hard and break frequently. Look for your limits both in speed and mentally. The episodes are very, very fast. The difference in level is sometimes 200m, the route leads to the top, uphill and you need to quickly adjust the appropriate driving technique. – says Tomek.

– The car is great (Honda Civic Group A, class 1600). My engineer did a great job and I thank him very much for that. The car is fast and drives really well, so we fire as much as we can – he adds.

He admits, however, that “driving in the rain kills him a bit”, namely racing on new, unknown routes, which he had to learn on a regular basis, on competitive rain tires, which he had not driven before.

– This is a novelty for me that I have to learn quickly (and on an ongoing basis). I try to catch my time and speed limits more and more, and this is a very demanding thing. On a dry surface, I am used to professional tires and I am able to break my records, but the technique of driving in the rain requires a bit of learning, because here, unfortunately, I lose a bit. And both on the track in Załuż (1st start), on Magura (2nd start) and in Sienna (3rd start) we had a weather reel: from a rainstorm, through drying asphalt, to completely dry, to heavy rainfall again – says Tomasz Lewczuk and adds that he is already waiting for the next races.

The 4th of the 8 stages of the Polish Hill-Climb Championship will be held on one of the most demanding routes – Limanowa.